Dressed in period costume Lydia entertains and educates with songs and stories from major eras of American history, including: 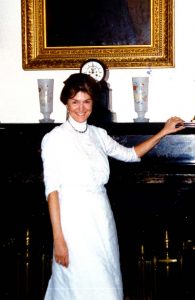 Nineteenth century women worked hard as homesteaders, mothers, and wives who owned no property, nor could vote. Ballads by Stephen Foster caught the pathos and alarming isolation many would have felt.

A program of songs and history from the Suffrage. Abolitionist and Temperance movements – in which Lydia’s own female ancestors participated.

Dialogue, satire, poetry and fresh new ballads will educate, entertain and inspire. Lydia’s performance as Susan B. Anthony celebrates the bicentennial of her birth and the centennial of what she fought so hard to achieve – Women’s Right to Vote.

Lydia entertains with songs and stories of men, women and children from the early years of America and into the 19th century. Dressed in authentic Colonial garb, Lydia Adams Davis brings to life the daily activities of families living in the Hudson Valley during the colonial and revolutionary war times. Accounts of bravery, treachery, political buffoonery, dame schools and patriotism are melodically expressed in familiar and obscure historical songs. Lydia has a program featuring Abigail Adams